I have been writing a series of poems called “Desire Lines”. A Desire Line (or Desire Path) is the name given to the makes made upon the landscape by people (or animals) as they make their way from A to B. Often then mark short cuts unplanned by planners. They are a material symbol of the sycretic desires of moving animals.

It has recently come to my attention that the metaphor of desire lines has been used to describe the inter-disciplinary impulse that allows scholars brought up in one field to venture into another. The following is a passage from Marjorie Garber’s wonderful book Academic Instincts (Garber, 2001, 53-54)

There’s a nice term that architectural planners use to describe the footpaths worn in the turf from one building or paved pathway to another…. The planners call them “desire lines”. Often, when they are well worn, these ‘lines’ in the grass will themselves be paved over, transforming them from renegade or “scofflaw” passages into new, officially sanctioned routes. In this fashion members of the public, the users of buildings and structures, reconstitute the space that links and separates institutions and authorized channels. “Desire lines” are a feature of many public walking spaces, but they are especially noticeable on collage campuses.It is interesting to recall that the medieval divisions of knowledge, the trivium and quadrivium, take their names from the Latin terms for the place where three, and then four, roads meet.

Garber’s point in this essay is to explore what she calls “discipline envy” – and the possibility of reimagining the boundaries of disciplines in order to return to a moment like that depicted in Raphael’s The School of Athens in which geographers engage with philosophers, mathematicians with poets and painters with architects – a “transcendent, multitemporal, interdisciplinary moment in which everything in intellectual life is in the process of being discussed, negotiated, and remade – and where the artist is present to watch and to participate” (p95) 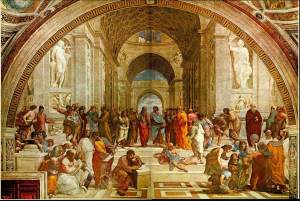 The School of Athens (Raphael)

I am not sure if I am suffering from “discipline envy” –geography is fine by me – but I am embarking on a journey – a desire line – that connects geography to creative writing. I am not sure enough people have walked this to actually leave a trace – but I am not the first.

Some time around 1947 the poet Charles Olson met the geographer Carl Sauer. They both became icons of their respective practices. It is a meeting that seems odd. Carl Sauer, to most contemporary geographers, is the epitome of anti-modern, anti-theoretical geography – a kind of geography that is happy to simply walk, look and map. Charles Olson, on the other hand, is the theoretical poet par excellence. His work sought to break up syntax and metre to such an extent that some have called his work post-modern. No one ever called Sauer that! They, are in other words, mirror images of each other. And yet Olson allegedly instructed all his Black Mountain poetry colleagues to read Sauer from start to finish.

Olson has been curiously absent from hours and days of discussion of poetry in the Faber Academy, in Banff for a week, in discussions with my supervisor, Jo Shapcott. This is not everyone’s experience. In The Shape of the Dance: Essays, Interviews and Digressions, Michael Donaghy reflects on his exposure of Olson at the University of Chicago. He describes being demoralized as he was force fed the Black Mountain poets while attending seminars with Derrida and de Man. “Charles Olson, that virtuoso of the typewriter, said that verse in rhyme, meter and stanzas was ‘verse which print bred”, says Donaghy, in one interview before continuing, “Olson was a fool.” Elsewhere he referred to the Black Mountain poets as a “case for deprogramming” and calls Olson “ a cult leader with all of Pound’s crankiness and none of his talent.”  I once brought up Olson’s name over a drink with the poet Hugo Williams only to see a flicker of loathing pass over Hugo’s face only to be matched by the mention of the British version of Olson, Jeremy Prynne.

In short, Olson is for academics and those who are interested in the world of “theory” – more or less precisely the same people who turned away from Sauer’s descriptive form of cultural geography in the late 1980s.